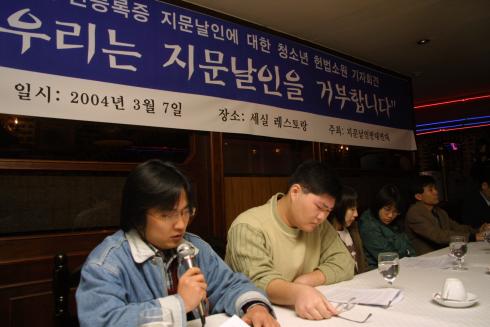 Three seventeen year-old high school students announced at a press conference on March 7th, 2004 that fingerprinting applicants upon issuance of their national ID card is unconstitutional. The students, Lee Ga-bin, Jung Seung-ho, and Choi Sun-a, are filing a petition against the fingerprinting. They issued the following statement: “The forcing of one’s ten fingerprints upon issuance of a national ID card infringes one’s basic human right.” This is the first time teenagers have filed a constitutional petition against the fingerprinting system.

One of the petitioners stated “On the day that I became seventeen, the yellow form felt so strange when I found out I must stamp my ten fingerprints on it.” He added, “There is no provision related to fingerprinting in the current Act.”

The system which enforces fingerprinting has been implemented since the Resident Registration Act was revised in 1968. Many civil and social organizations have repeatedly asserted the fingerprinting system exists only in South Korea and should be abolished. However, the government has continued to ignore it. The teenagers’ petition may be the first opportunity to end this unconstitutional conduct by the Korean government which has occurred for the past 30 years.